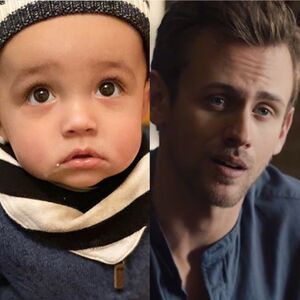 Jack was conceived through IVF due to fertility struggles with his parent's.

Jack is born twelve weeks early in "The Waiting Room" via an emergency c-section. When his parents first get to see him in the hospital's NICU, Kate decides to name him after her late father. In "Her," Jack is healthy enough that Kate and Toby are allowed to take him home.

Jack is diagnosed with stage 4 Retinopathy of Prematurity at the end of "Strangers." This means Jack is legally blind. Before his diagnosis is revealed, the adult Jack is introduced.

His parents work very hard to give him a normal life. It was hard for his father to accept that he was blind. Eventually though, Toby learned to accept it and made a music studio for Kate and baby Jack.

Jack grew up with a love of music and in the future he is a successful musician.

In the present, Jack is a happy baby and loves to listen to his mother sing to him.

In the future, Jack is a musically talented young man who is kind and romantic. His personality is similar to his grandfather and namesake Jack.

"How could a stranger ever end up being you?”

•He was named after his late grandfather, Jack Pearson.