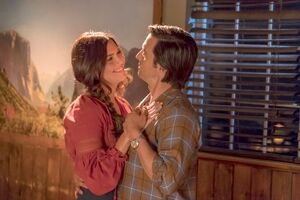 Kevin and Zoe land in Vietnam; in the past, Jack and Rebecca take a road trip to Los Angeles; Jack's war story continues to be revealed.

Kevin and Zoe prepare to land at the airport in Vietnam. Jack and Nick reunite but Nick doesn't believe that Jack is there. Jack tells him that he'll figure out how to get him out of here. Jack and Rebecca go on a road trip to Los Angeles. Rebecca is excited to meet with the record label. She asks Jack if there's anything he's excited about doing in California. He says that he'd like to meet up with some friends of his in Reseda. Kevin and Zoe drive through Vietnam. Kevin already feels closer to Jack. He takes a picture of the two of them while in the car. Zoe asks him to not tag her in the picture because she doesn't want her Dad to know that she's in Vietnam.

Kevin and Zoe eat at a local Vietnamese market. Kevin tries to get Zoe to talk about her childhood but she is very standoffish. Zoe points out some other tourists and Kevin recognizes the necklace that the woman has around her neck. He asks her where she got it from and she points in the direction of a souvenir shop. Kevin goes to investigate and learns that his dad's necklace isn't unique. Jack and Rebecca arrive at a restaurant. Jack asks Rebecca about how she got her demo to the record label. Rebecca tells him how she loves to sing so that people can slow dance. Jack takes the hint and the two of them start to slow dance. Rebecca asks him if he's a cryer and he says no. That he's gotten pretty good at pushing everything down. After, they head to their hotel room. They share a brief kiss and go to bed. Later, in the middle of the night, Rebecca goes to lay with Jack and the two of them have sex. One night while they're on the road, Jack has a nightmare and Rebecca wakes him up from it. While they're driving, Rebecca tries to talk to him about his nightmares but Jack shuts her down real quick.

Jack continues to walk towards the village he's stationed at. He passes by a man with a motorcycle and asks him for a ride back to the village. Jack and Rebecca arrive at Rebecca's friend's house. Jack leaves Rebecca and her friend Nicole to get them drinks. Rebecca tells Nicole that she's crazy about Jack but doesn't feel like he's letting her in. Kevin is upset to learn that there is no epic backstory about how Jack got the necklace. He wishes that he would've listened to Randall and left well enough alone. Kevin gets upset that Zoe won't share any information about her past. Zoe asks if they can go back to the hotel because she doesn't feel well. Kevin thinks that she's just avoiding talking but then Zoe throws up.

Jack returns with drinks for Rebecca but ducks when he hears a champagne bottle go off. He tells Rebecca that he's okay. Jack waits for his ride outside but gets curious and goes to look at what the mans doing. He learns that the guy was delivering cans for homemade landmines. The guy comes back out and continues to drive Jack back to the village. Rebecca is getting ready for bed when Jack tells her that he isn't able to talk about Vietnam. He doesn't want to bring that part of his life into what he has going on with Rebecca. He asks her if she's going to come back to Pittsburg and she says that she doesn't know. Jack drops her off at the record company and leaves to go to Reseda. Rebecca doesn't get the news that she hoped for as the record label turns her down. Jack arrives at the Waterson's house to tell them about how he is responsible for their sons death.

Jack gets dropped off and is forced to walk the rest of the way to the village. Jack talks to the Waterson's about the war and about the football game that they played. How it was Roger, their son's, idea to play. He tells them that he let his guard down and how taking his eyes off Roger was the worst thing he did over there. He says that he needed to come here and tell them that and that he is sorry for what happened. Roger's dad gets up and goes to sit next to Jack. He tells him that it wasn't his fault. Kevin gives Zoe some coconut water to help calm her stomach. He tells her that he wants to know everything about her but if he can't then that's okay too. He tells Zoe that he's falling in love with her whether she opens up to him or not. Zoe reveals to him that her dad sexually abused her and that occasionally her dad tries to contact her to make amends. She tells him that she's not going to let her Dad ruin this too. Kevin apologizes because he didn't know and that she seemed so strong. Zoe tells him that she is strong.

Jack picks up Rebecca. Rebecca tells him about what the record label said. Jack asks if he can hear the song. Rebecca reluctantly sings for him. As she does, Jack begins to cry. Jack sits eating when he sees a Vietnamese woman wearing that necklace. He grabs his gun but she runs off. Jack is fixing the fence when a helicopter arrives. Dawson tells him he has two weeks to straighten Nick out. Nick tells him he should've left him to rot. Rebecca stops singing and reaches out and places her hand on Jack's knee. She tells him to take them home.