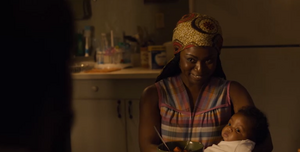 She is an immigrant from Nigeria.

This character grew up in Nigeria. She moved to America with her daughter, Sky. She moved to Philadelphia, as opposed to Texas, because of the death of her husband, Emeka.

This character is very interested in reading books. She is very educated and works as a nurse.

Other characters that know this character are Randall Pearson. Another close character is William. William and ChiChi are tenants of the same apartment building. She was the closest form of family to William before Randall found him.

This character appears in episode 2 of Season 3. She is initially shown as a strong, independent, single mother of baby Sky. As the episodes progress, she slowly lets her guard down around Randall's biological father, William.

"We are not our problems."

Did you know that this character is from the Igbo tribe of Nigeria?