The Right Thing to Do

The Right Thing to Do
Edit This Page 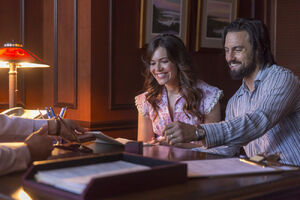 The Right Thing to Do is the eleventh episode of This Is Us. It premiered on January 10, 2017.

Kate struggles with her feelings in the aftermath of Toby's heart attack. As William begins to spend more time with Jesse, Randall has to get used to his father's new relationship. After receiving the news they're expecting triplets, Jack and Rebecca must find a way to afford a home that can accommodate three babies. Olivia unexpectedly resurfaces, throwing both Kevin and Sloane for a loop.