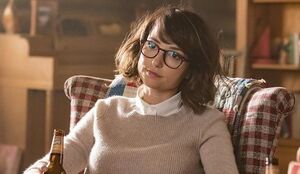 Sloane is the playwright of the play which Kevin auditioned for, was cast in, and eventually self-produced. She is portrayed by actress Milana Vayntrub

We first meet Sloane in the episode The Pool, as she watches Kevin and Olivia while they read through her play.

Sloane is quiet, and reserved. She appears to have been cast as a sort of foil character to Olivia.

Olivia and Sloane are co-workers, since Olivia is the female lead in Sloane's play. The two are not close, and there seems to be a brief animosity between them over Sloane's somewhat repressed feelings for Kevin. In the season 1 episode, The Trip, Olivia brings Sloane, along with Olivia's ex, Asher, to the Pearson family cabin without Kevin's permission. Later, Sloane's relationship with Olivia is further strained when Olivia witnesses her sharing a moment with Kevin and decides to quit the play and leave on a journey to find herself.

Sloane meets Kevin when he auditions for her play. Later, she brings Olivia's ex as a date to Kevin's family cabin, which was meant to be a trip for Kevin and his siblings only. Chaos ensues when Asher and Olivia cruelly make fun of Kate's weight, and Kevin kicks them out of the cabin. However, they leave in Sloane's car before she can join them. Kevin offers to allow Sloane to stay, and the next morning, Kate finds them together in bed.

Sloane's relationship with Kevin changes her; she becomes much more confident, so much so that when Olivia disappears, Sloane takes on the lead female role in her own play.