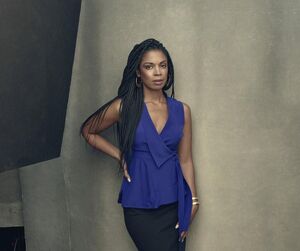 Susan Kelechi Watson is an American actress. She currently stars as Beth Pearson in This Is Us.

Susan Kelechi Watson is a graduate of the School of Fine Arts at Howard University in Washington, DC. Both her mother and father are Jamaican and she has trained extensively as a dancer. Susan was chosen by Phylicia Rashad, also a Howard University alumnus, to study Shakespeare with a London theatre company.

Watson may be best known for her recurring role on three seasons of "Louie" as the title character's ex-wife, Janet. She also has a recurring role on the hit NBC drama "The Blacklist," and previously had multi-episode stints on "Third Watch," "NCIS" and "The Following."Watson has been especially busy the past two years, also guest starring on "Billions," "Limitless," "Blue Bloods," "Happyish," "Veep," the upcoming HBO series "Divorce" and several other television series.Her film credits include the period drama "Peter and John," starring Jacqueline Bisset, and the indie "Small, Beautifully Moving Parts."