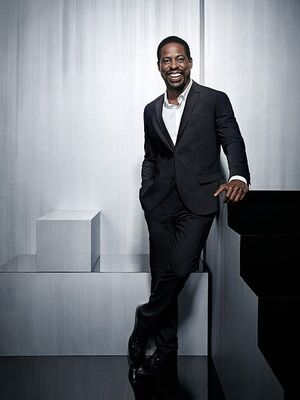 Sterling Kelby Brown is an American actor. He currently stars as Randall Pearson in This Is Us.

Brown graduated with a bachelor of arts in drama from Stanford University, before receiving his master's degree in fine arts from NYU's Tisch School of the Arts. He currently resides in Los Angeles with his wife and two children.

Brown most recently earned rave reviews and an Emmy Award nomination for his portrayal of prosecutor Chris Darden in the acclaimed television event series "The People v. O.J. Simpson: American Crime Story" on FX. He also co-starred alongside Tina Fey in the feature film "Whiskey Tango Foxtrot."Brown recently wrapped production on M. Night Shyamalan's film "Split" and the fact-based feature film "Marshall," about the first African-American on the Supreme Court.A lover of theater, Brown has performed in a variety of stage shows, including the Off Broadway "Father Comes Home From the Wars (Parts 1, 2 and 3)," for which he reprised his role at the Mark Taper Forum in Los Angeles earlier this year. His additional stage credits include "Macbeth," "The Brother/Sister Plays" and "The Resistible Rise of Arturo Ui," opposite Al Pacino.For seven years, Brown portrayed Dr. Roland Burton on the Lifetime series "Army Wives." Additional television credits include "Supernatural," "Person of Interest," "Masters of Sex," "The Mentalist," "Castle" and "Criminal Minds."

In June 2007, he married actress Ryan Michelle Bathe, his college sweetheart. They have two children.