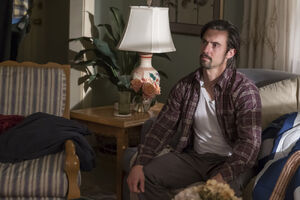 Moonshadow is the eighteenth episode and season 1 finale of This Is Us. It premiered on March 14, 2017.

A drunk Jack drives to Rebecca’s show. In the past Jack fixes Mrs Peabody’s car when she sets him up with a girl. Rebecca is eating lunch with her friends who try to set her up with someone at the wedding. In the present Jack walks into the bar where Rebecca’s performing and orders a drink. Rebecca is in the dressing room when Ben enters and tries to kiss her only to be rejected. Rebecca exits and walks past Jack but he doesn’t notice her. In the past Jack’s father berates him for not having an actual job. In the present Rebecca calls the house only for the call to go to voicemail. Rebecca leaves a message and then walks away. In the past Jack and Darryl talk about a poker game they heard about. In the present, Jack drunkenly tries to find Rebecca and walks into her dressing room but no one’s there. Ben sees Jack who attacks him out of rage. Rebecca walks in and sees the aftermath of the fight. Rebecca makes the bouncer take Jack out and realises her night is ruined. In the past Rebecca receives a rejection letter from Danielle about her demo. A sad Rebecca drops the letter and calls Janet saying she wants to diversify. Jack gets a call from Mrs Peabody about the date and agrees. Jack and Darryl get to the poker joint. Jack wins only to be mugged by Ray’s bouncers who threaten to kill him or Darryl if he ever sees them again. In the present a silent Jack and Rebecca drive home. Jack tried to speak to Rebecca but she doesn’t want to talk to Jack while he’s drunk. In the past Darryl promises Jack they’ll try to find another way to earn money when Jack brings up stories about his dad. Jack then promises that they will go back to the bar to get their money back. In the present Rebecca and Jack get home where Rebecca listens to her unheard voicemail. Jack says that he’s bin drinking for “a few weeks” and the two proceed to fight. An enraged Rebecca says she has “no life” and the two fight more until Rebecca tells Jack to tell her what he loves about her. Jack doesn’t answer which prompts Rebecca to go to bed. In the past Rebecca prepares for her blind date and Jack prepares to meet with Darryl. In the present the sun comes up and Rebecca finds Jack on the couch and tells him to stay with Miguel for a few days which he agrees to. In the past Rebecca arrives at her blind date while Jack details his plan to Darryl. Jack goes to the bar and Rebecca’s date arrives. In the present Jack admits to Rebecca that he can’t be the man he was when they first met but still loves her. Kate says she wants to sing, Randall wants to adopt and Kevin goes to his meeting with Ron Howard. In the past Rebecca ditches her blind date and goes to the bar to sing. Darryl calls the bar and the manager leaves the cash register while on the phone. Jack doesn’t pick up the money. In the present Jack lists all the reason he loves Rebecca. Past Rebecca meets past Jack. Present Jack leaves causing Rebecca to shed a tear that falls onto her necklace