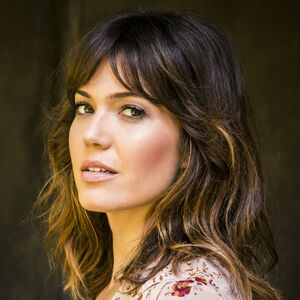 Amanda Leigh "Mandy" Moore is an American actress. She currently stars as Rebecca Pearson in This Is Us.

Amanda Leigh Moore was born in Nashua, New Hampshire, on April 10, 1984, to Stacy (Friedman), a former news reporter, and Don Moore, an airline pilot. During her childhood, her family moved to Orlando, Florida, where she was raised. She has Russian Jewish (from her maternal grandfather), English, and some Scottish and Irish, ancestry.

After seeing the musical "Oklahoma!", she decided that she wanted to pursue a career in singing. As a child, she performed the National Anthem at several athletic events around her hometown of Orlando, Florida, and became known as the "National Anthem girl".

At the ripe age of 14, while she was recording in a studio in Orlando, a Fed-Ex worker who happened to be passing through heard her and was interested in her talent. He happened to know someone at Sony as well. Moore worked on cutting a demo and shortly thereafter signed a record deal with Sony 550 Music. At 15, her first record "So Real" was released. Her first tour was with the Backstreet Boys. Since then she's released five albums and starred in the film "A Walk to Remember" and led the leading role as Rapunzel in the Disney animated film "Tangled".

In 2008, Moore began dating singer-songwriter Ryan Adams. They became engaged in February 2009 and married on March 10, 2009, in Savannah, Georgia. Moore filed for divorce in January 2015 while Adams was in New York, citing "irreconcilable differences". Moore and Adams later released a joint statement explaining their decision, describing it as a "respectful, amicable parting of ways". Court documents obtained a few days later indicated that they had been legally separated for nearly six months prior to the filing. The divorce was finalized in June 2016.

Since July 2015, Moore has been in a relationship with Dawes singer Taylor Goldsmith, which she often addresses on social media and during interviews. Moore and Goldsmith got engaged in 2017.