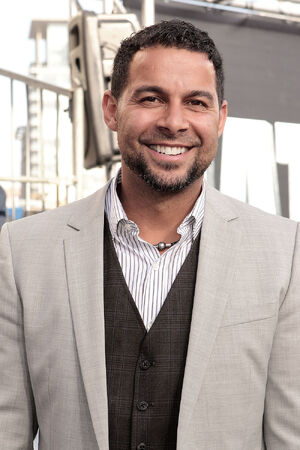 Jon Huertas is an American actor. He currently stars as Miguel in This Is Us.

Huertas, born Jon William Hofstedt, enlisted in the United States Air Force in 1987 and served for 8 years as an aircraft nuclear/conventional weapons specialist. He participated in Operation Just Cause and Operation Desert Storm.

Huertas married his long-term girlfriend, Nicole, in Tulum, Mexico on May 4, 2014.

Huertas's acting career started in 1993 when he played an uncredited part in the The Webbers.

In 1998, Huertas portrayed Joe Negroni in the romantic drama Why Do Fools Fall in Love alongside such stars as Halle Berry, Paul Mazursky, and Ben Vereen. In 1999, he appeared in two films: the horror movie Cold Hearts and the action movie Stealth Fighter. In the 2000s, he appeared in many films, but his biggest role was in television in 2008 as Sergeant Espera in HBO's miniseries Generation Kill about the 2003 invasion of Iraq.

From 1998 to 1999, Huertas played the role of Antonio in the television series Moesha. From 1999 to 2000, he played Brad, a witch hunter, in Sabrina, the Teenage Witch. Beginning in 2009, Huertas has starred in the role of Detective Esposito in ABC's police procedural Castle. In 2012, Huertas and his Castle co-star Stana Katic received the award for Performance in a Drama Episode at the 16th Annual PRISM Awards.

In June 2011, Huertas made his debut music video single called "Sex Is the Word".