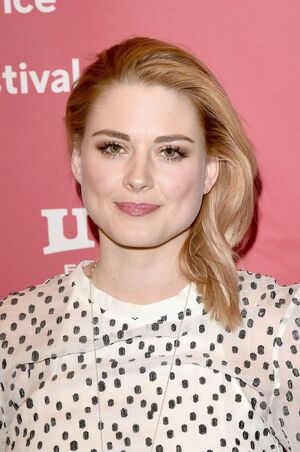 Alexandra Hetherington Breckenridge is an American actor. She currently stars as Sophie on This Is Us.

Breckenridge was born in Bridgeport, Connecticut. She lived in Darien, Connecticut, until the age of 10, when she and her mother moved to Los Angeles. A year later, they moved to Mill Valley, California. At age 13, Breckenridge became interested in acting, photography, and singing. At age 15, she and her mother moved back to Los Angeles to pursue Breckenridge's acting career. She is the niece of actor Michael Weatherly.

Breckenridge guest starred as Shelly Weaver on Freaks and Geeks in 2000. When she was 15, she met James Franco at an audition. She was surprised that Franco recognized her on the set of Freaks and Geeks. She also guest starred on Dawson's Creek, CSI, Buffy the Vampire Slayer, Charmed, Undeclared, Medium, and JAG. She guest-starred as Francise in three episodes of Opposite Sex. In 2002, she appeared in the film Big Fat Liar, starring Frankie Muniz, as Jason Shepherd's older sister Janie.

Breckenridge has had numerous voice roles on the animated television series Family Guy. During an interview with FHM, she stated, "When I first went for Family Guy, I auditioned for a guest voice. I don't know why, but [creator] Seth MacFarlane really likes the sound of my voice. I'll never understand that. He just liked me and they call me back all the time to do different things." Breckenridge often does celebrity impressions on the show, such as Sarah Jessica Parker and Renée Zellweger. She also had roles on MacFarlane's web series Cavalcade of Cartoon Comedy. She guest starred in the episode "With Friends Like Steve's" of American Dad!, also created by MacFarlane.

In 2006, Breckenridge starred as Monique in the film She's the Man. She starred as Willa McPherson in the series Dirt from 2007 to 2008. She has appeared in a couple of shows that have later been cancelled. In 2009, Breckenridge co-starred in the independent film The Bridge to Nowhere by Blair Underwood. She also had a role in the film Ticket Out.

Breckenridge had a recurring role in season four of HBO's TTrue Blood, and also in season one of FX's American Horror Story as Moira O'Hara, the ghost of a maid trapped in the house in which she was employed. She also returned for several episodes in season three of the show, American Horror Story: Coven, as Kaylee: a young witch who excels in pyrokinesis.

In 2015, Breckenridge began playing Jessie Anderson in season five of the AMC series The Walking Dead. In 2015, she next co-starred in the psychological thriller Dark from executive producer Joe Dante and director Nick Basile. In 2017 Breckenridge appeared in the recurring role of Sophie, Kate's childhood friend and Kevin's ex-wife, on the NBC drama series This Is Us.

Breckenridge is interested in photography and has her own darkroom in her apartment. At age 24, she began taking photography seriously as a form of self-expression. Her then-boyfriend Bryten Goss helped her with lighting. In 2008, she had her first exhibit with Shalon Goss hosted by her uncle Michael Weatherly and presented by Edgar Valera. She said, "I had so much to express emotionally with this show. Each photo is an expression of myself and the things I have gone through in the last three years. From my perspective, the purpose of art is to evoke feeling and to inspire. That's all I hope to achieve."

Breckenridge has several tattoos, which get covered by make-up for her on-screen projects, but not during photoshoots. She has said about them, "We cover them up. Some make-up artists are better than others, but there's airbrushing, and there's a sort of latex waterproof paint, body paint obviously."